It is time for UTV Service’s first group ride together.

After talking with our friend, Lance, he gave me an idea about a ride around Eureka, Utah. I have traveled through this town a dozen times in the last few years heading to our local sand dunes. Lance had worked with Nick Castleton, Mayor of Eureka, several years ago. He said Nick was a UTV rider and took people on UTV tours with lots of history involved. I emailed the mayor and set up a ride for May 18th at 8:30 A.M.

The temperature had been in the middle 80’s for multiple days and the weather had been nice. The ride was several weeks away, so the plan was made.

We had confirmation on about 6 UTV’s to take the ride with us, and we thought this would be good for the first group ride. As we got closer to May 18th, the weather had taken a turn for the worse. In fact, it actually was snowing in Eureka the day before our ride and the temperatures for Saturday would be in the low 30’s and not make it into the ’50s, but no rain was predicted. The forecast had had rain 7 days straight! I was expecting to start getting the emails from riders canceling because it just didn’t look like good weather. But, instead, I started getting emails that they were still in and asking if it was still a go-ahead, including a call from the Mayor saying he had warm clothes and was ready – no one backed out!

Saturday morning at 6:30 Jackie and I had the UTV loaded and headed to Eureka. We met in the city park to unload. We were bundled up, as it was 33 degrees and cloudy. By 8:45 we had our 6 UTV’s and Nick took us around the mountain to head toward the mines that made this town famous. We were not far into the ride, and we knew already this would be one of the muddiest rides we had been on. The mud was flying in the air and the UTV’s were sliding all around in 4 wheel drive, and with tires looking like great big slicks, we head to our first history stop – The Knightsville School and the mountain, wherein the mid to late 1800s there was a thriving small town. The schoolhouse was set in the mountainside with the mines literally in backyards. Who knew there was $12 billion worth of precious metals taken out of this local town? They ended up pulling out of the mines because they could not stop the water from filling up the mines.

We were having a fun time, even with as cold as it was, and the mayor loved telling the history stories of this little town.

There will be several more stops along the way as we climbed up the mountain and stopped at a mine right on the trail. The mayor let us know that this was the first mine where the authorities looked for the young couple that was killed several years ago. They were suspected of being dumped down a mine shaft, and after hearing how long it took a large rock to reach the bottom of the shaft, it would make for a good spot to hide someone. 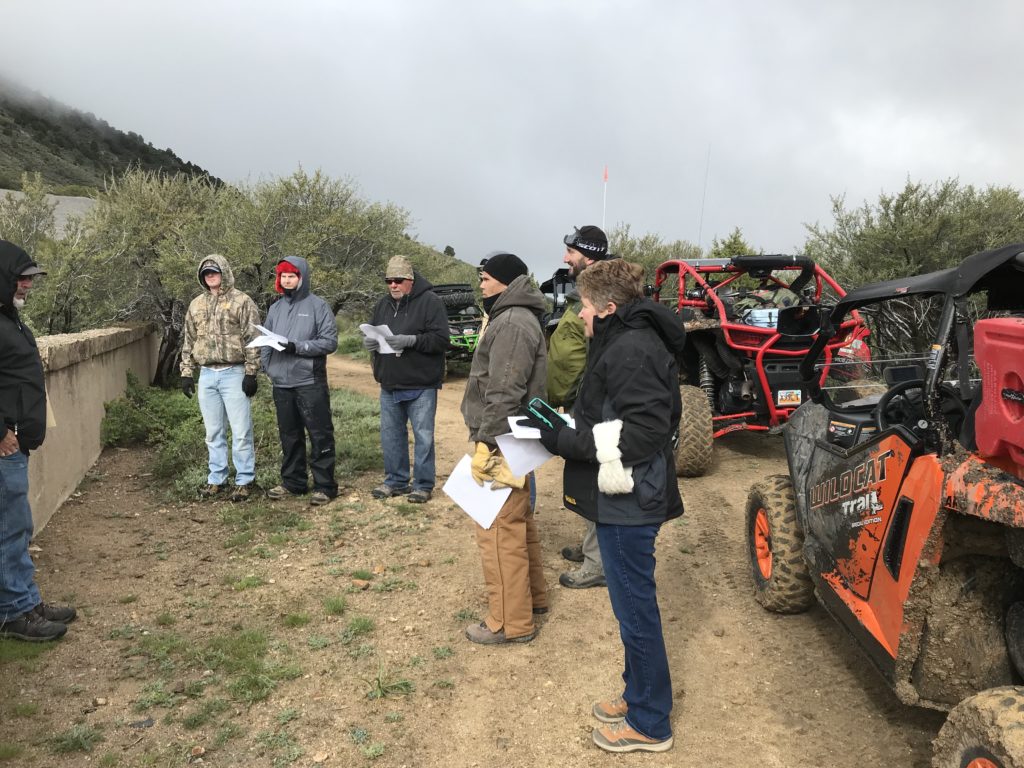 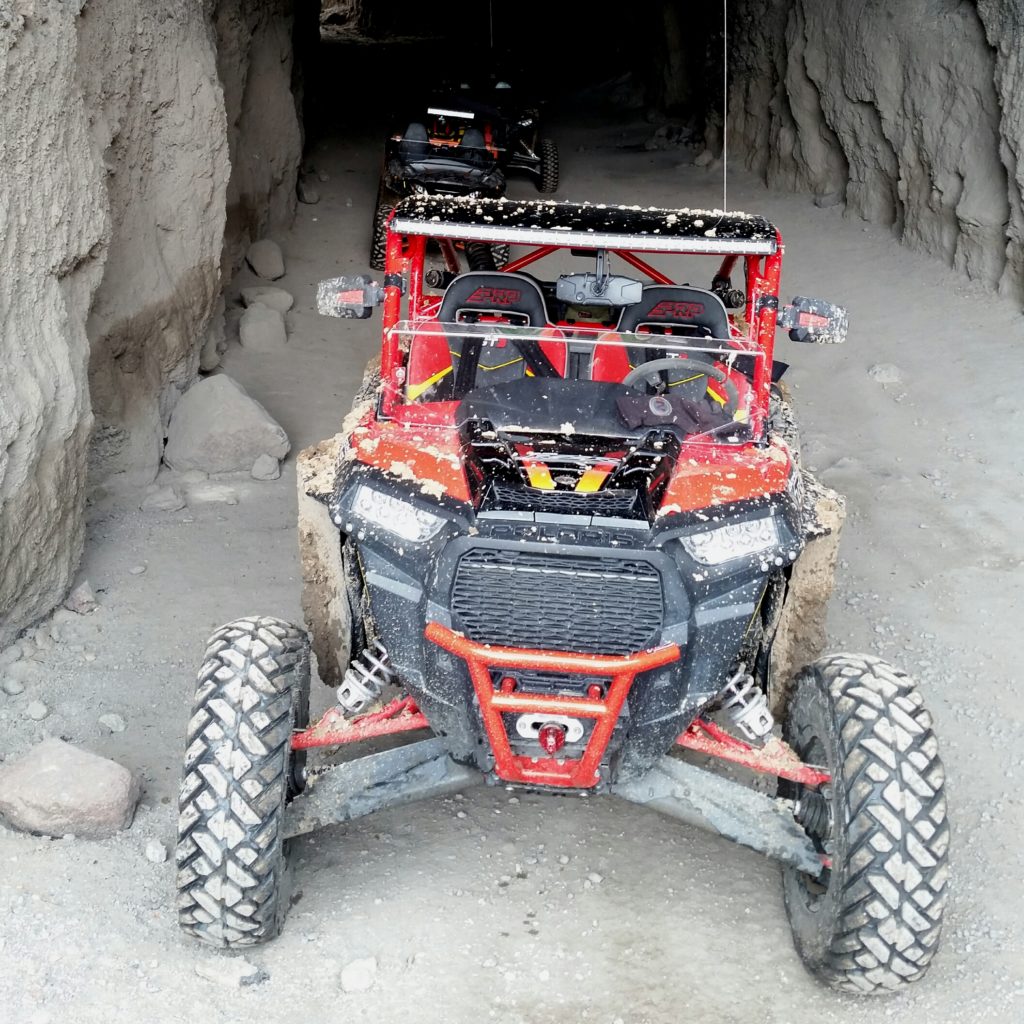 The UTV’s by this time were covered with a thick layer of mud. We knew it was going to be a big job getting these machines clean again, but now we were into it! So, we might as well have fun doing it. After several hours of learning about what made this town thrive in the late 1800s and early 1900s, the mayor suggested we head over to the B’s Restaurant for lunch. He recommended the pickle bomb sandwich. Shannon, our friend, went for it and seemed to love every bite of it! So, if you ever want to try something new to eat, give it a whirl if you like pickles and bacon on a hotdog bun.

After we had a good time at lunch, Lance & Shannon, Bill and Jackie and I went for an afternoon ride to find the famous tunnel everyone keeps posting about on Facebook. Nick had told us the direction to head there, so off we went. Of course, it was not as easy to find as we hoped. But, after a pretty steep detour and getting turned around where we wondered if our machine was going to roll down the hill, we got back down. Google maps saved the day, and off we went to the tunnel.

It was a fun short ride. We experienced cold, but everybody was dressed for it, so this was not an issue. We had mud flying like crazy, and it started hailing for a brief minute, but everyone seemed to have a good time.

I want to thank Jackie, Lance & Shannon, Arctic Cat trail, Bill Oakden Polaris rock crawler edition, Matt Gubler Arctic Cat 1000 4-Seat and his brother Adam, Greg with a beautiful Can-Am X3 Turbo, and the Mayor, Nick Castleton, and his friends for the guide and history lesson of a town that boomed over 100 years ago.

After a ride in the thick wet mud, it takes me back to my childhood when my dad used to take me on hunting and camping trips. When we would get into conditions like this, dad would chain up the front wheels of his jeep or truck and let the mud fly. His chained up 4×4 was the type of vehicle that would make the big giant ruts in the road. Yes, we would make it where we were headed, but the price was big ruts. I watched all of us in our lighter UTV’s all sliding around, but making it up to the trail, sometimes landing in these ruts without any choice. But, I did notice the UTV’s do not tear up the trail compared to the trucks in my childhood days.

After returning I spent about 5 hours cleaning my Polaris XPT to get it back to the condition I like to have it in. This is a lot of work for a trip of this kind, but just know that it was an experience with friends that would not be possible without the sacrifice of getting gnarly muddy.

I own my UTV to go on many forms of riding including Sand dunes, Mountain trails, Moab rock crawling, Hunting, Desert high speed and, yes, mudslinging all in the name of fun.

For all your UTV maintenance needs, give us a call or email me directly.

Until we ride again

Owner of UTV Service specializing in shocks and suspension.

I have always loved making cars and now UTV’s run and handle there best. I do not believe in taking short cuts and when something comes along that does not fit my values I will not sell or back that product.